This is a post from Paul Cairney, outlining notes for his talk to the Scottish Government during its evidence and policy week. The talk’s abstract is as follows:

A key aim in government is to produce ‘evidence based’ (or ‘informed’) policy and policymaking, but it is easier said than done. It involves two key choices about (1) what evidence counts and how you should gather it, and (2) the extent to which central governments should encourage subnational policymakers to act on that evidence. Ideally, the principles we use to decide on the best evidence should be consistent with the governance principles we adopt to use evidence to make policy, but what happens when they seem to collide? Cairney provides three main ways in which to combine evidence and governance-based principles to help clarify those choices.

He uses the same basic structure of the talks he gave to the OSF (New York) and EUI-EP (Florence), arguing that every aspect of ‘evidence based policy making’ produces the need to make political choices (even when we define EBPM): 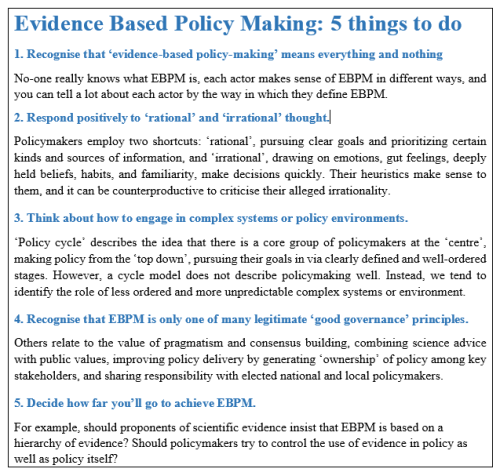 In this post he focuses on points 4 and 5 regarding the relationship between EBPM and governance principles.

The Scottish Government has a reputation for taking certain governance principles seriously, to promote high stakeholder ‘ownership’ and ‘localism’ on policy, and produce the image of a:

Many aspects of this image were cultivated by former Permanent Secretaries: Sir John Elvidge described a ‘Scottish Model’ focused on joined-up government and outcomes-based approaches to policymaking and delivery, and Sir Peter Housden labelled the ‘Scottish Approach to Policymaking’ (SATP) as an alternative to the UK’s command-and-control model of government, focusing on the ‘co-production’ of policy with local communities and citizens.

The ‘Scottish Approach’ has implications for evidence based policy making

Note the major implication for our definition of EBPM. One possible definition, derived from ‘evidence based medicine’, refers to a hierarchy of evidence in which randomised control trials and their systematic review are at the top, while expertise, professional experience and service user feedback are close to the bottom. An uncompromising use of RCTs in policy requires that we maintain a uniform model, with the same basic intervention adopted and rolled out within many areas. The focus is on identifying an intervention’s ‘active ingredient’, applying the correct dosage, and evaluating its success continuously.

This approach seems to challenge the commitment to localism and ‘co-production’.

At the other end of the spectrum is a storytelling approach to the use of evidence in policy. In this case, we begin with key governance principles – such as valuing the ‘assets’ of individuals and communities – and inviting people to help make and deliver policy. Practitioners and service users share stories of their experiences and invite others to learn from them. There is no model of delivery and no ‘active ingredient’.

This approach seems to challenge the commitment to ‘evidence based policy’

The Goldilocks approach to evidence based policy making: the improvement method

We can understand the Scottish Government’s often-preferred method in that context. It has made a commitment to:

‘Service performance and improvement underpinned by data, evidence and the application of improvement methodologies’

So, policymakers use many sources of evidence to identify promising, make broad recommendations to practitioners about the outcomes they seek, and they train practitioners in the improvement method (a form of continuous learning summed up by a ‘Plan-Do-Study-Act’ cycle).

This approach appears to offer the best of both worlds; just the right mix of central direction and local discretion, with the promise of combining well-established evidence from sources including RCTs with evidence from local experimentation and experience.

Not surprisingly, our story does not end there. I think there are four unresolved issues in this process:

4. The spectre of democratic accountability and the politics of EBPM

The fourth unresolved issue is the biggest: it’s difficult to know how this approach connects with the most important reference in Scottish politics: the need to maintain Westminster-style democratic accountability, through periodic elections and more regular reports by ministers to the Scottish Parliament. This requires a strong sense of central government and ministerial control – if you know who is in charge, you know who to hold to account or reward or punish in the next election.

In principle, the ‘Scottish approach’ provides a way to bring together key aims into a single narrative. An open and accessible consultation style maximises the gathering of information and advice and fosters group ownership. A national strategic framework, with cross-cutting aims, reduces departmental silos and balances an image of democratic accountability with the pursuit of administrative devolution, through partnership agreements with local authorities, the formation of community planning partnerships, and the encouragement of community and user-driven design of public services. The formation of relationships with public bodies and other organisations delivering services, based on trust, fosters the production of common aims across the public sector, and reduces the need for top-down policymaking. An outcomes-focus provides space for evidence-based and continuous learning about what works.

In practice, a government often needs to appear to take quick and decisive action from the centre, demonstrate policy progress and its role in that progress, and intervene when things go wrong. So, alongside localism it maintains a legislative, financial, and performance management framework which limits localism.

How far do you go to ensure EBPM?

So, when I describe the ‘5 things to do’, usually the fifth element is about how far scientists may want to go, to insist on one model of EBPM when it has the potential to contradict important governance principles relating to consultation and localism. For a central government, the question is starker:

Do you have much choice about your model of EBPM when the democratic imperative is so striking?

I’ll leave it there on a cliff hanger, since these are largely questions to prompt discussion in specific workshops. If you can’t attend, there is further reading on the EBPM and EVIDENCE tabs on my blog, and specific articles on the Scottish dimension:

Paul Cairney, Siabhainn Russell and Emily St Denny (2016) “The ‘Scottish approach’ to policy and policymaking: what issues are territorial and what are universal?” Policy and Politics, 44, 3, 333-50